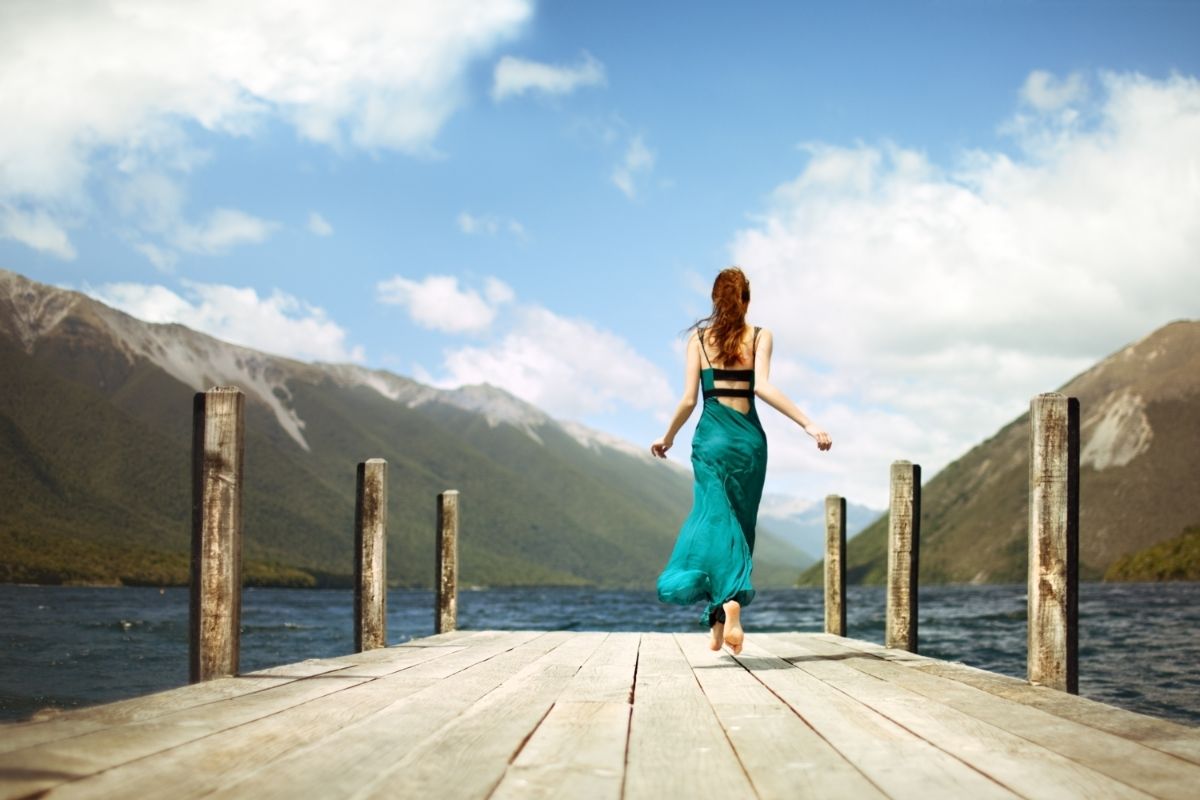 There are some dreams which have more obvious meanings than others. While some dreams can be really obscure, leading to wondering what on earth was on your mind at the time, dreaming of running away is not one of them.

A dream like this mirrors avoidance in waking life, where the last thing you want to do is to face something. You’d rather run for the hills in the opposite direction, as fast as your thoughts or feet can spirit you away.

But what if you don’t feel as though you’re running from something in your waking life? There’s a little more to dreams of running away than you might think.

What Does It Mean To Run Away In A Dream?

Dreams of running away essentially point to avoidance issues, when you’d rather do absolutely anything else. This sounds fairly simple, but it’s not the only reason why you might have a dream like this.

Pay attention to the details within your dream, as this can completely change the symbolism behind the experience, and what you might assume your dream to mean can be the complete opposite of what your subconscious is trying to tell you.

What – or who – you are running from is one of the most important aspects of your dream that you need to pay attention to.

You may be avoiding a situation or a niggling thought in waking life instead of a person, such as a doubt eating away at you, or a troubling atmosphere somewhere in waking life.

A dream of running away from something can also signal a problem in what motivates you. Maybe what has motivated you in the past no longer works, and you’re struggling to find new meaning in your life.

Perhaps tricky circumstances in waking life are affecting how well you think you can handle what life throws at you, and you’re despairing.

Maybe you reached a long-term goal and found out that it wasn’t what you wanted after all. It could be that you enjoyed the journey to get there more than the actual outcome. Is it time to set your sights on something new?

Common Dreams Of Running Away And What They Mean

Looking at the most common dream scenarios is a great way of starting out when trying to discover what your dream might mean.

While some dreams might be obvious at first glance, there’s usually a little more nuance involved than you might assume. The more you practice interpreting your own dreams, the easier it will be to decide what your dream is trying to tell you.

Running Away From Home In A Dream

Dreaming of running away from home (see also article on dreams about not being able to get home) suggests that there’s a discord in your personal life. More than likely, this refers to arguments or problems at home.

Maybe someone isn’t pulling their weight at home and avoids doing their fair share of chores, shirking their responsibilities whenever they think they can get away with it.

A dream like this is very common when your home is full of arguments and not much else. They don’t have to be dramatic bust-ups to reflect how uncomfortable things are in waking life right now, but this could be something equally disturbing, such as your partner becoming distant.

Dreams involving running away from your home can point to not knowing where you stand with other people, and as a home is supposed to be one of the safest places (even in dream spaces), it implies a deep uncertainty in waking life or a great desire for change.

Dreaming Of Running From Danger

Running from danger is an interesting one. The source of danger helps deepen the interpretation.

Running from a house fire (see also article titled ‘8 Different Meanings When You Dream Of A House On Fire‘) in your dreams implies impending change, solving problems, and a greater sense of freedom, even if you felt terrified in your dream.

A car (see also article titled ‘Car Accident Dream Meaning And Interpretation‘) without a driver rolling in your direction, and you have to run from it suggests that you’re not willing to take control of a situation. You want things to be easy, but you’re not making any effort to make that happen.

You’re feeling the pressure in waking life, and you’re allowing this to distract you from the possible paths you can take.

Running From Insects In A Dream

A dream where you run from insects (see also article titled ‘Butterflies In Dreams: What’s The Hidden Spiritual Meaning?‘) implies there’s trouble ahead of you. Dreaming of bees (see also article titled ‘What Do Bees In Dreams Mean? Bee Dream Interpretation‘)
chasing you – which are normally very docile creatures unless you threaten them – implies that something is about to ‘agitate’ your life.

As bees live in hives, this upheaval will be because of others. Bees acting aggressively in dreams denote relationship problems, such as arguments with your partner, or a colleague making trouble for you at work.

Dreaming of swarms or clouds of insects (see also article titled ‘Tarantula Dream Meaning and Symbolism‘) such as bees chasing you suggests that you have the wrong impression of someone, and this oversight or assumption will cause you a lot of trouble in the near future.

Someone might betray you in some way, and you should be careful exactly what kind of trust you place in other people’s hands.

A nightmare where locusts come towards you reflects how you are exhausted in waking life, or you feel taken advantage of in some aspect.

Maybe you’re giving too much of yourself to others, but when you call on the support that you hope to get from the people you love, it doesn’t seem to be there like it should be.

Running Away From Animals In Your Dream

Dreaming Of Running From Your Pets

This is an odd one. If you dream of your beloved pet (see also article on cat dreams) turning on you, this can denote trust issues you have in general, or in this specific relationship.

Maybe you can’t trust them with a certain situation because they’ve had a bad experience in the past, and you worry how they might react if they’re presented with a similar situation in waking life.

A dream like this also denotes a worry of doing something wrong which will affect them for the rest of their lives.

Running from a dog in your dream reveals family or ‘pack’ problems in your waking life while running away from a cat (see also article about dreams of lions) suggests that you’re ignoring your intuition at all costs, or there’s a discord between your personal goals and your responsibilities.

Maybe you don’t feel you have enough time for both, or you feel your independence is being affected in some way.

Running From Predators In Your Dream

Running away from a bear in your dream suggests you’re having difficulty controlling your anger or frustration in waking life, or you’ve lost touch with your reality. You need to work on grounding yourself in the present moment, instead of looking ahead or to the past.

If you run from a tiger in your dream, this stresses the importance of listening to your instincts, and not inviting trouble by ignoring your intuition. If something about someone or something seems wrong, do not commit at first glance.

Figure out why your intuition is sending out bat signals of distress before you decide to make a move in any direction. Maybe you need to adjust your course in order to get there.

Dreaming Of Running From Monsters Or Aliens

A dream of this type indicates a relationship breakdown somewhere in waking life. As your dream is a forewarning, you can avert this if you choose to.

If you dream of being terrified by a monster lurking in your house, this implies an unresolved conflict that you really need to reconcile. If you don’t, you’ll never move on.

Running From People In Your Dream

Dreams involving running from people can mean different things depending on who it was you were running from.

Running from a stranger in your dream implies that you are afraid of change, and the unknown. This points to the desire to want to control what you can in life to feel safe. The stranger also may represent part of you that you’re not willing to acknowledge.

A dream where you run from a teacher implies that you are unwilling to face the honest facts about a situation. Maybe you’re ignoring your own experience or someone else’s knowledge because you want something to turn out differently.

Someone chasing you in a dream represents part of your psyche that scares you. Maybe you’re willing to sacrifice something important without a second thought to get where you want to be.

Running From a Killer In Your Dream

If you run from a killer in your dream, this signifies that you feel threatened or trapped, but you don’t know exactly where these emotions are coming from. This is a source of anxiety in itself.

A Dream Where You Run From A Loved One

A dream where you run away from someone you love suggests you’re not being honest about a situation, or a relationship is about to fall apart.

Dreaming of running from the cops or the FBI implies that you’re trying to avoid as many problems as you can, but your subconscious is telling you that you can’t prevent everything in life.

If you dream of murdering (see also article titled ‘The Hidden Meaning Behind Dreams Of Murder‘) someone, and then you have to run away from the law, this points to regret, guilt, or how you want to avoid as many liars as possible, but sometimes you have to catch someone in a lie to know where you stand.

A dream where someone does something criminal, and you have to run, as a result, implies that you want to be removed from a potentially risky situation. Maybe you’ve helped someone with gray morals in the past, but you want to keep your decisions your own.

Dreaming of running away signals that you’re reluctant to face something in your waking life. Your subconscious mind urges you to explore why you might not be willing to confront something, and if there’s any real reason for the fears you have.

These dreams are a way of exploring your fears and insecurities, sorting out the rational ones from the impossible. Once you know which are which, you can do something about the plausible ones, and leave the rest to fade into the background, allowing you to focus on the present.